In 2012 ADO SA completed two projects in the Construction Management area. Both of them had to do with the Provision of Technical Consultant Services for the Static Upgrade of two Building Complexes. The first complex is the San Stefano Hotel in Corfu and the second one is the Armonia Hotel in Vouliagmeni, Athens.

The services that ADO SA offered are:

In 2007, a service contract was signed between the Ministry of Regional Development and Public Works of the Republic of Bulgaria and the Consortium of ADO SA with a Bulgarian company (ADO SA being the leader) for the project: “Provision of Supervision Services of the Rehabilitation of Road II-81 from Montana to Lom”.

The works contract consisted of rehabilitation of approximately 40km of road II-81 from Montana to Lom in the northwest part of Bulgaria.

The rehabilitated section had to comply with the EU standards. The project was supervised by the Engineer on the basis of FIDIC General Condition for building and Engineering Works designed by the Employer (Red Book), First Edition 1999. 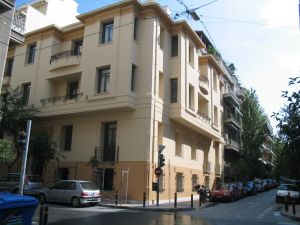 In 2006 ADO SA performed the “Rehabilitation of the Preserved Building on the crossing of Drossopoulou & Kefallinias Streets in Kypseli, Athens”. The area of the building was 1.100m² divided in 4 floors (semi-basement and 3 floors) with common stair-well and elevator. Each floor consisted of two separated apartments while there was additional storage space (75m²) in the semi-basement and in the rooftop of the building. The building was built within the 1930’s and it has been characterized as preserved according to the Greek Official Gazette/ No 70/26.01.2005. The architectural design of the building belongs in the Eclectic Period, while its construction and structural elements are a combination of reinforced concrete with massive foundation walls in the semi-basement. The building was fully renovated for office use without losing its original characteristics that defines its identity.

ADO SA executed in 2006 the Construction Management of a Steel Structure in Sindos, Thessaloniki.

The main areas of the building were a Ground Floor (400m2) that consisted of office spaces, a laboratory area and a permanent residence for guards, a Mezzanine Floor (200 m2) formed and equipped as office space and the First Floor (400m2). Space for an elevator for 8 people or goods was provided. The building had central cooling/heating and was equipped with alarm, complete wiring and finalized surrounding area (green, headlights, layering, power supply, etc.).

ADO SA in cooperation with a Greek company undertook the project of Quality Control Consultant (Q.C.C.) for the projects “Ag. Konstantinos by-pass” and “Kamena Vourla by-pass” at the section “Loggos-Skarfeia” of PATHE motorway. The contract was signed in November of 2005 and the duration was 72 months (36 months the construction phase and 36 months the maintenance phase). The budget of the contract was € 1.400.000 approximately without VAT.

The service provided by ADO SA was the control and supervision in order to make out, organize and operate the Quality Management System of the Contractors of the above-mentioned projects with target the on time completion of the projects according to the approved design, the specifications and the applicable standards and regulations.

ADO SA in cooperation with a Bulgarian company offered Construction Supervision Services on Project for the “Rehabilitation of Road II-29 from the Bulgaria/Romania Border (Negru Voda) to General Toshevo“, (Ministry of Development and Public Works, 2003 – 2005).

ADO SA in cooperation with an international company was assigned the Project “Provision of Construction Supervision Services on Transit Roads Rehabilitation Project III-LOTS 3,4,8 & 9” (EUROPEAID/113009/D/SV/BG) in Bulgaria. The project referred to the provision of construction supervision services for implementing the rehabilitation works of 4 lots of Transit Roads of the country.

The scope of the Construction Supervision Services of the project concerned the activities of the Consultant as:

ADO SA as leader of the Joint Venture "ADOSCET", which was established in cooperation with a French company, was assigned the Project "Construction Management Services of Egnatia Motorway and Perpendicular Axes Projects", for the Central Sector of Egnatia Motorway. The contract was signed on 2002 and the contract value was approximately € 8.000.000 for the first two years.

The Central Sector's works include the following sections:

Since 1996, ADO SA has been extensively active in Northern Greece, as the major Partner (65%) and Leader of the international Consortium EGNACONSULT J/V, rendering Construction Management services, according to the Greek Public Works Legislation, to the East Region of Egnatia Motorway Road Axis (Redina - Kipi/Turkish Border) and to the Perpendicular Axis (Ardanio-Ormenio/linking with Bulgaria). The total contract of the joint venture was over € 20.000.000 and was completed in 2002.